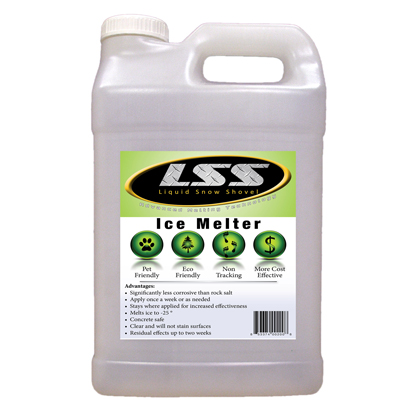 LSS is an ECO-friendly, “CLEAN”, clear, odorless ice melt that is biodegradable, non-hazardous, non-staining and will not produce a white residue.

Liquid Snow Shovel is an Anti-bonding and De-icing agent which is exothermic and hygroscopic by nature. Since Liquid Snow Shovel is generating heat and is already in the brine state before contact with the surface, it is capable of melting snow and ice at a faster rate than dry sodium chloride (rock salt).

Liquid Snow Shovel can leave the pavement and concrete surface actively melting for several days. When you use sodium chloride (rock salt), it becomes inactive in a much shorter period on time with no residual affects. Liquid Snow Shovel provides effective liquid ice control when applied either before or after a snow or ice storm.

When used prior to the storm, Liquid Snow Shovel inhibits the bonding of snow and ice to the pavement or concrete, making it easier for snowplows and snow shoveling to clear snow down to the bare pavement. When used after the storm, Liquid Snow Shovel is active immediately melting the snow on contact, keeping sidewalks and parking lots clear down to the bare pavement depending on weather conditions.

What is Liquid Snow Shovel?

LSS is a formulated blend of calcium chloride and a proprietary stabilizer that is used to help keep sidewalks, parking lots, and roadways free from the adverse effects of ice from -25°F.

LSS is a “stand-alone” alternative to rock salt with much less harmful effects on the environment.

How do winter anti-icing/deicing liquids such as Liquid Snow Shovel work?

Anti-icing is the newest snow and ice control practice. It was pioneered in Europe and involves preventing the formation of bonded snow and ice by timely applications of chemical freeze-point depressants. Relatively small amounts of a liquid chemical applied before or immediately at the start of precipitation. This strategy either eliminates the need for further action or reduces the task of clearing roadways, parking lots and side walks to bare pavement conditions. At the same time, it requires smaller chemical amounts than would be required under conventional deicing practices. As a result, anti-icing is quickly becoming a vital strategy for many end users.

Liquid Snow Shovel is hygroscopic and deliquescent. This means it attracts moisture from the air and its surroundings and goes into a solution quickly as it attempts to return to, or remain in, its natural liquid state. Liquid Snow Shovel retains this ability even under conditions of very low humidity. For dry forms of calcium chloride these properties allow rapid brine creation for faster deicing action. For Liquid Snow Shovel it means longer- lasting effects as the solution resists evaporation to remain an effective brine even as dilution occurs. Generally, anti-icing techniques are more efficient than deicing, because it requires far less energy to prevent a bond from forming than to break it.

Think of holding two magnets close together but not joined. It takes little energy to keep them apart. But once the magnets are linked “like ice bonded to the pavement ” it takes a lot of energy to break them apart. And so it is with anti-icing versus deicing techniques. Less chemical is required to prevent the bond than to break it. In a typical winter storm, both techniques may be necessary to provide safe working conditions. Pavement surface temperature, ambient temperature and pavement chemical concentration levels are all variables that affect pavement refreeze. Refreezing occurs when ice control chemicals dilute sufficiently that the brine solution turns to ice. Monitoring the variables closely allows for timely reapplication before refreeze.

Why is Liquid Snow Shovel right for me?

Is Liquid Snow Shovel used for de-icing or anti-icing?

Liquid Snow Shovel is both. However, we have found that it works best for anti-icing. The reason is due to the fact that it takes more energy to break a bond (deicing) than to prevent a bond from forming (anti-icing), meaning it will take more product to break down ice than prevent it. Traditionally, salting occurs after the storm and plowing.

By using LSS as an anti-icier, you apply the product either weekly or before the storm, and it creates a melting barrier between the pavement and snow. This barrier prevents a bond from occurring so even hard packed down snow plows or shovels off easy. Bare pavement every time you plow or shovel.

What quantities of Liquid Snow Shovel are available?

What type of applicator should I use to apply Liquid Snow Shovel?

Drop in Bed Units- Fits into short or long bed pickups. 100, 150, and 200 gal units depending on your pickups payload capacity. Perfect for all types of parking lots and obstacles. See next page for more info.

Whatever your need may be, we can custom design a unit to fit your situation up to 3000 gallons.

We contract out our snow removal & salting, and I'm not able to apply the product myself.

If you contract out your snow removal and salting, you should either pass this information on to your contractor or give us his information and we can talk directly to them. If you are not interested in applying the product yourself, we offer this as a service. Ask your sales rep for more information.

Is this a completely new concept?

No, the use of calcium chloride for clearing sidewalks, parking lots, and roadways has been around since the 1970’s.

This is common practice in areas where temperatures are too cold to be able to use rock salt such as certain parts of Canada and Europe.

How does the coverage compare to rock salt?

How does the cost compare to rock salt?

How does the effective temperature compare to rock salt?

Rock Salt
– Not Effective below 20°
– White Residue Tracking
– Up to 60% of Rock Salt is ineffective because its plowed or shoveled away.
– No residual effects.
– Very corrosive-Deteriorates concrete, kills vegetation, and is harmful to pets.
– Applied after storm with no schedule

Liquid Snow Shovel
– Effective up to -25°
– No White Residue Tracking
– Stays in the pores of aggregate and cannot be plowed or shoveled away.
– Increases square footage because of residual.
– 2/3 less corrosive than rock salt.
– Concrete, vegetation, and pet friendly.
– Can be built into budget with a 24 application process.

Historically, rock salt has been relatively cheap and abundant, so for the use of removing ice, it was relatively cost effective. However, with increased global demand for salt, the price of salt has increased three-fold over the last decade.

Currently, as you may have heard, there is an ever increasing shortage of rock salt, and distributors of it are not making commitments to have a supply of it. This is causing many municipalities, contractors, and property owners to be left without or paying high prices that have been described as “gouged” rates.

Rock salt is only effective to 20°F, making it unsuitable for many of the winter days that we see right here in West Michigan.

Rock salt is also easily displaced due to car tires, being shovelled away, or being plowed away. The result is having to use more product than is necessary to get the desired result.

Displaced rock salt usually ends up in areas of vegetation such as lawns or flower gardens, causing burned vegetation and over long periods of time, contamination.

Rock Salt is not pet friendly. The salt itself can become stuck in the paws of animals which can cause discomfort and burns. Also, animals may eat the rock salt thinking it is food, and become sick.

So, by using this product, I can put away the plow, snow blower, and the shovel?

No, although the product applied before a storm can melt the first couple inches of snow, we in no way imply that our product will remove all your snow. Normal plowing and snow removal is still necessary.

Can you show me an example of a treated sidewalk?
I’ve heard of/used a product like this before and it didn’t work.

In the past, there have been many products that have come out on the market such as beat juice, mineral well brine, and oil well brine and de-sugarized molasses to name a few. These products, although relatively cheap ,are considered “dirty” products. They come unrefined which will stain concrete and are inconsistent in their percentages of active ingredients causing variances in performance results.

Liquid Snow Shovel is a “clean” product meaning that it is colorless, odorless, leaves no white tracking residue, not harmful to pets or humans, refined, and has consistent active ingredient percentages. Call us today for a free no obligation demonstration of Liquid Snow Shovel. We can come to you, or you can come to us!

Why does MDOT use winter anti-icing/deicing liquids?

Not a big talker, just drop us a line - we're here to help!

Join our email list for exclusive offers and discounts